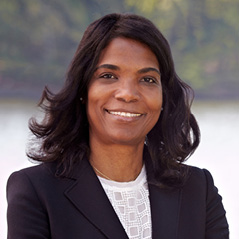 She previously served as Executive Vice President Health & Safety for the SUEZ Group and was responsible for employees and subcontractors use of proper safeguards while performing work activities. In this capacity, she was responsible for directing and providing Health & Safety oversight to all Business Units of the Group. She also led the development and implementation of behavior based safety practices, audited Health and Safety procedure implementation and compliance with corporate and regulatory requirements, and monitored the effectiveness of safety control measures used throughout SUEZ Business Units.

Nadine has more than 25 years of industry experience in operations, management, compliance, client relations and due diligence. Since joining the SUEZ North America team in 2000, she has held leadership positions of increasing responsibilities within the company’s regulated, contract and corporate segments. She served as part of the management team at projects located in Atlanta, GA and Rahway, NJ in 2003, before being appointed vice president and general manager for the SUEZ North America Toms River division in 2006. Nadine also headed the company’s corporate internal audit department from 2009 until 2011 then served as President of SUEZ North America’s Environmental Services from 2011 until 2016. In this capacity, she was responsible for overseeing the operations and management of contract operations throughout the United States and Canada. This includes over 80 projects affiliated with municipal and industrial water and wastewater systems as well as two solid waste treatment facilities.

In addition to her technical expertise, Nadine also shares the company’s commitment to corporate social responsibility. As a volunteer with SUEZ, Nadine went to Haiti shortly after the devastating earthquake in 2010. Since then she has been involved in helping the government rebuild its severely damaged water infrastructure systems.