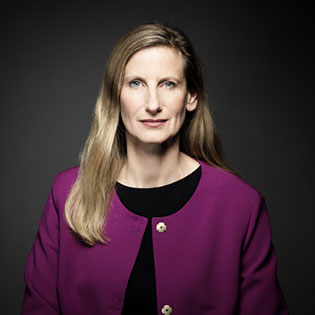 Independent director. Member of the Management Board in charge of Energy Provider's Technology division at EWE AG

Ines Kolmsee, born on April 4, 1970, was appointed as Director by the Shareholders’ Meeting of May 22, 2014. She holds several engineering degrees (TU Berlin, Germany and École des Mines de Saint-Étienne, France), as well as an MBA (INSEAD Business School – France/Singapore).

From 2004 to 2014 she was Chief Executive Officer of SKW Stahl-Metallurgie Group, a chemicals specialist with activities around the world. In 2010, she founded her own company in the rural electrification sector.

In May 2015 she joined EWE AG, one of Germany’s largest energy companies, as Chief Technology Officer (CTO). She currently focuses on her own company, Smart Hydro Power GmbH. She is also a Director at Umicore SA. Previously, she held several positions, including Chief Financial Officer at Arques Industrie AG.
Other major offices and positions held during the last five years Current
Director of Umicore SA (Belgium)
Expired during the last five years
Member of the Management Board in charge of the Technology division at EWE AG (2015-2016)
Member of the Supervisory Board of Fuchs Petrolub AG (from 2011 to 2015)
Member of the Supervisory Board of Deutsche Telekom (2015)
Chief Executive Officer of SKW Stahl-Metallurgie Group (from 2004 to 2014)
Top search words
TOP