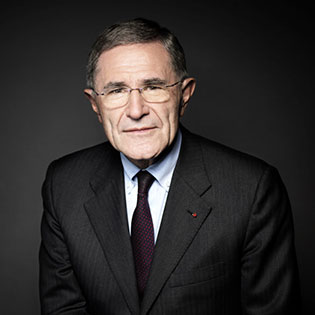 Chairman of the Board of Directors of SUEZ

Gérard Mestrallet, born on April 1, 1949, is a graduate of École Polytechnique and École Nationale d’Administration. After occupying various positions in the Treasury Department and in the office of the Minister of Economics and Finance, Mr. J. Delors, Gérard Mestrallet joined the Compagnie Financière de SUEZ as a Project Manager. In 1986, he was appointed Executive Vice-President for industrial affairs. In 1991, Gérard Mestrallet was appointed Executive Director and Chairman of the Management Committee of Société Générale de Belgique.

In 1995, he became Chairman and Chief Executive Officer of Compagnie de SUEZ. Gérard Mestrallet was Chairman and Chief Executive Officer of GDF SUEZ (now ENGIE) following the merger between SUEZ and Gaz de France on July 22, 2008 until May 3, 2016, the date on which he became Chairman of the Board of Directors of ENGIE. Moreover, he is Chairman of the Paris EUROPLACE Association, honorary Chairman of the Chongqing Mayor’s International Economic Advisory Council, a member of the Shanghai and Beijing International Councils, Director of Tongji University (Shanghai) and Honorary Doctorate of Cranfield University (UK).

Other major offices and positions held during the last five years

Expired during the last five years
Chairman and Chief Executive Officer of ENGIE (until May 3, 2016)
Various offices held at companies of the ENGIE Group and the SUEZ group
Director of Pargesa Holding SA (until May 6, 2014)
Director of Saint-Gobain (until June 4, 2015)
Top search words
TOP